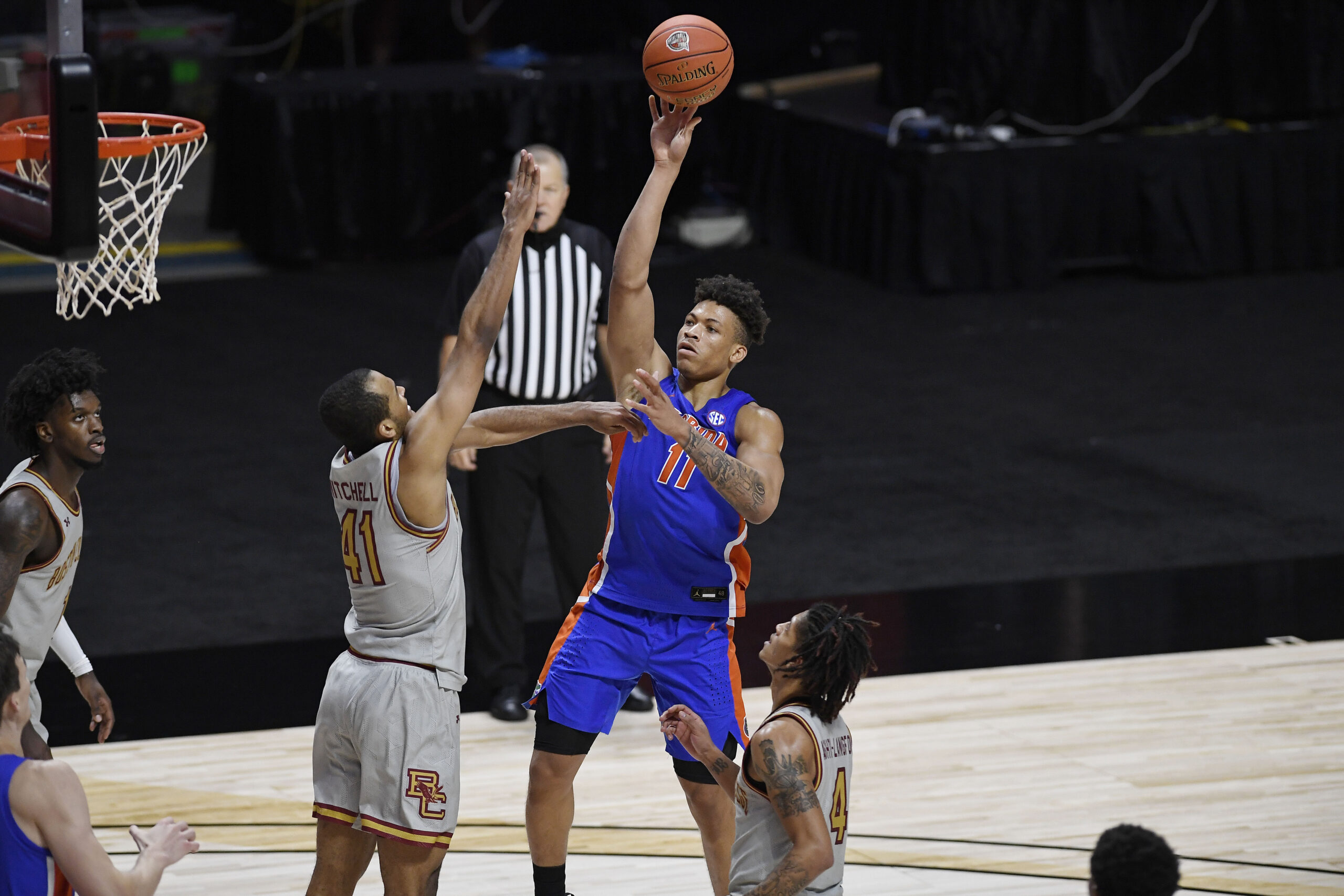 A University of Florida basketball player who collapsed during a game last December is deciding whether to try and get medically cleared to play professionally or cash in a $5 million insurance policy.

Two people with knowledge of Keyontae Johnson’s situation told The Associated Press that the senior forward’s policy went into effect in July 2020, five months before he crashed face-first onto the court at Florida State. Both people spoke to the AP on condition of anonymity because of privacy concerns.

The 22-year-old Johnson hasn’t practiced or played since, and according to one of the people, the Gators don’t anticipate the 6-foot-5, 230-pound Virginian being medically cleared to return this season.

“He’s very much a big part of our program,” Florida coach Mike White said last week. “No change in status at all. Not practicing. Coaching, helping organize practice, prepare for practice, doing some officiating. He’s active in drill work.

Johnson, the Southeastern Conference’s preseason player of the year in 2020, has turned his attention toward pursing a potential NBA career, one person said. He would need medical clearance _ something that hasn’t happened in the 11 months since his collapse _ and then pass any number of tests before being allowed to attend next year’s NBA Combine and/or privately work out for teams.

Johnson’s policy provides him enough flexibility to take steps toward playing professionally and still be able to reverse course and make an insurance claim, one of the people said. If he does trigger the insurance policy that Florida paid the premiums on, there’s an option for him to take the $5 million as a lump sum. There’s no timetable or deadline for Johnson to make a decision on his future.

If he doesn’t play again, Johnson has the lucrative policy to offset the loss of future earnings.

College basketball players are eligible for the NCAA’s Exceptional Disability Insurance Program if they have eligibility remaining and have the potential to be selected in the first round of the upcoming NBA or WNBA draft. The program also covers football, baseball and men’s ice hockey.

Football and men’s basketball players can be insured for up to $10 million. Tokio Marine HCC, based in Wakefield, Massachusetts, is the program administrator, according to the NCAA.

Former South Carolina running back Marcus Lattimore filed a claim on a $1.7 million disability insurance policy he took out in college. Former Florida defensive tackle Ed Chester was one of the first college players to benefit from an insurance policy. Chester collected $1 million in 1999 after suffering a knee injury during his senior year.

Johnson could be in for a bigger payday. Until then, though, he will continue his role as “Coach Key.”

He sat at the end of Florida’s bench during the team’s exhibition game Monday, an 80-57 victory over Embry-Riddle, and offered guidance to old and new teammates. Johnson remains enrolled in school and on scholarship. He is scheduled to graduate in April.

The Gators would love to have him on the floor, but they also want to protect him and help him make the best choices for his long-term health and his financial future.

He averaged 14 points and 7.1 rebounds as a sophomore in 2019-20 and shot 54% from the field while playing 31.3 minutes a game. He was expected to be even better last season, but instead instantly became a trauma patient on Dec. 12. He crumpled to the court seconds after breaking a team huddle in the fourth game of the COVID-19-delayed season.

Johnson received emergency medical attention in front of horrified teammates, opponents and fans before getting rushed to a Tallahassee hospital. He spent 10 nights in hospitals and returned home in time to celebrate Christmas with his family. He was on hand for Florida’s first practice following a two-week hiatus.

Florida reached its fourth straight NCAA Tournament despite playing most of the season without Johnson.

Johnson and his family have remained quiet in recent months. They declined requests to be interviewed for this story but released a statement in February saying his collapse was not related to a previous positive COVID-19 test, citing a consultation team that included experts from four highly respected schools of medicine.

The family did not say what doctors believe caused Johnson’s trauma.

Johnson hosted a basketball camp for about 60 kids in June, getting paid for the endeavor as he took advantage of new NCAA rules that allow current student-athletes to make money from their name, image or likeness. He continues to wait on medical clearance that might never come.

Johnson told the Orlando Sentinel during the event that it had not been determined if a heart malfunction triggered his collapse. But until the possibility is ruled out, he’s not allowed to run, jump or participate in any cardiovascular exercise.

“That’s why they’re doing tests. That’s why it’s longer than expected. They just don’t know,” Johnson told the paper. “They don’t know if it was my heart or it could be something else. It was just a freak incident; they’re just trying to figure it out to make sure I’m fine before they clear me.”

Copyright 2021 Associated Press. All rights reserved. This material may not be published, broadcast, rewritten or redistributed.

0 Replies to “Basketball Star Must Decide: NBA or $5 Million in Insurance”