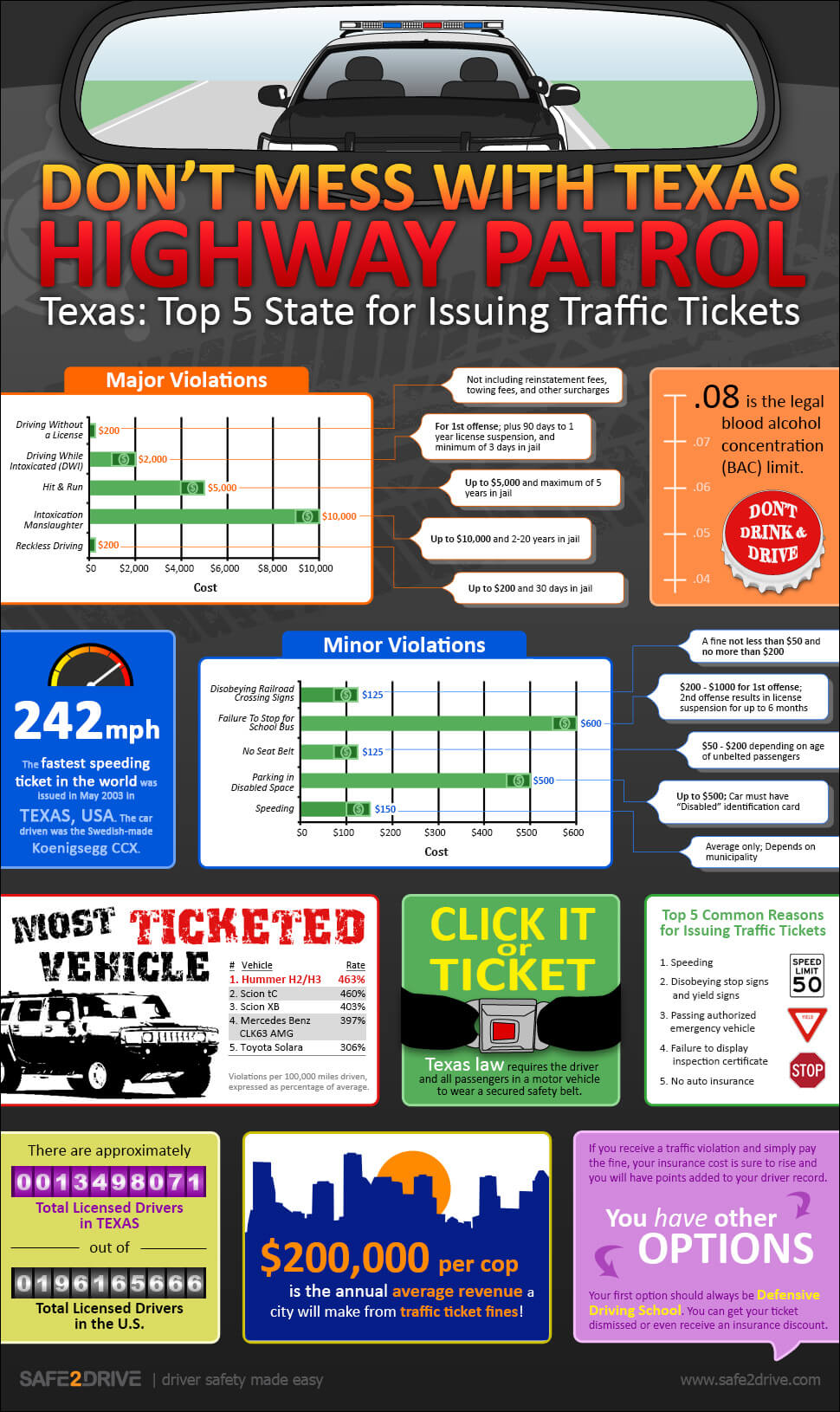 Below are some interesting facts and figures about Texas traffic violations.

Traffic violations are the most common types of offense that people make. They are typically divided into two types: major and minor. Both types have consequences, depending on the severity of the violation. The best way to get points removed from your record after committing a traffic violation is to take a Texas Defensive Driving course.

Examples of minor violations and their consequences:

Tickets are usually issued for a minor offenses and the violator can either pay the fine, try to fight it in court, or attend traffic school to dismiss the ticket (if the court allows it).

Examples of major violations and their consequences:

Fact: The legal blood alcohol concentration limit in Texas is .08

The consequences are more severe for major offenses. You can be arrested and imprisoned if you are found guilty.

A yearlong study was conducted to determine which car is most likely to draw a ticket for their driver. ISO Quality Planning, the San Francisco company who conducted the study, analyzed over 1.7 million driver records and came up with a list for the most ticketed and least ticketed vehicles.

* = Violations per 100,000 miles driven, expressed as percentage of average.

“The sense of power that Hummer drivers derive from their vehicle may be directly correlated with the number of violations they incur,” said Raj Bhat, the president of ISO Quality Planning. “Or perhaps Hummer drivers, by virtue of their driving position, are less likely to notice road hazards, signs, pedestrians and other drivers.”

According to national statistics, about 63% of people killed in a crash were not wearing a seat belt. Seat belts are your best protection in a car crash. They save approximately 13, 000 lives in the United States each year and continue to be the most effective tool in reducing injuries during a car crash.

The law of inertia states that an object in motion will continue to stay in motion until something else stops it. Imagine that you are driving at a steady 50mph. At this point, your speed and the car’s speed are pretty much the same. Now, imagine if the car were to crash into a tree. The tree would stop the car’s motion, but you would keep moving forward at the same speed.

If you are not wearing a seat belt during a car crash, you would have to either hit the steering wheel or go through the windshield at 50mph before your motion would slow down. This could instantly kill or severely injure you. If you are wearing a seatbelt in a car crash, the seat belt will act as the stopping force and allow your body to slow down. It prevents you from flying forward and being ejected from the vehicle.

Most states, including Texas, have enacted the Primary Seat Belt Law, which allows an officer to give you a ticket just for not wearing a seat belt. To learn more, visit Click It or Ticket – Texas.

A Texas law firm has listed some of the most common laws from the Texas Transportation Code that Texas police use to issue traffic tickets.

An interesting fact about traffic tickets is that an average traffic cop generates an annual average revenue of $200,000 for the city – just from traffic ticket fines! In Texas alone, the state’s top forty speed traps generated a total of $178,367,093 in speeding tickets from 2000 to 2008.

Below are the top 10 states that are known for writing tickets:

If you’ve received a traffic ticket in Texas and need to take a Texas Defensive Driving course, click below!